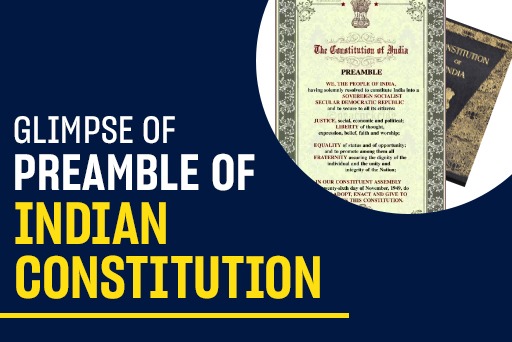 GLIMPSE OF PREAMBLE OF INDIAN CONSTITUTION

We the people of India have solemnly resolved to constitute India as a sovereign, social,secular, democratic republic and to secure its citizen

Justice: Social, Economic & Political Liberty of thought, expression , belief, faith and worship, Equality of status and opportunity, Fraternity assuring the dignity of individual and unity and integrity of the nation

Sovereign here means India has the power to take its decision on its own in every aspect of its affairs nobody can stop her from making her own decision and nobody can relieve its power. though India came to a member of state in 1949 and England being the head of the state country doesn’t make any difference on its sovereignty, likewise indeed if India is a member of UNO but she's free to take its own decision.

Socialist India will promote socialist proposition but in its popular form, not the form that describes Marx's proposition of illiberalism where coffers are nationalized and a complete prohibition of private property or business. India has a mixed frugality and both the private and govt form of business live then but coffers will be distributed inversely in popular form. so then-popular form of illiberalism exists.

The Constitution of India contains 395 articles in 22 parts. Additional articles and parts are inserted later through various amendments. There are also 12 schedules in the Indian Constitution.

Essential Skills for a Successful Career in Indian Judiciary

How to Start Preparing for the Judiciary Examination

How to Prepare an Effective Study Plan for Best Success-results

Glimpse of Preamble of Indian Constitution